The Summer of Bernie

Royal here! And today we are celebrating the life of my friend Bernie. Bernie has been my friend since I was 10 weeks old. Bernie was just getting ready to turn 14 when we found out he had a terrible form of cancer. This is Bernie's story... 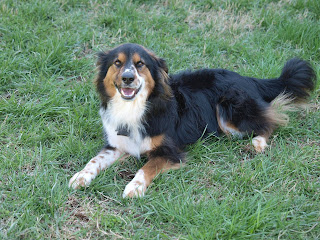 Bernie was rescued when we was 8 weeks old by Paws4Ever, a shelter in Mebane, North Carolina. Bernie was listed as a Bernese Mountain Dog puppy and he had really big feet! Maybe people were afraid that we would grow too big! 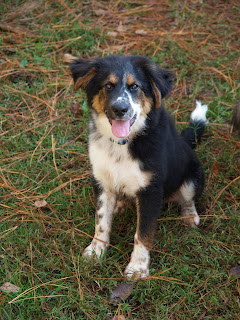 Puppy Bernie was at a Tellington TTouch workshop at Paws4Ever and that's when he caught the eye of Jenn and her friend Laura. 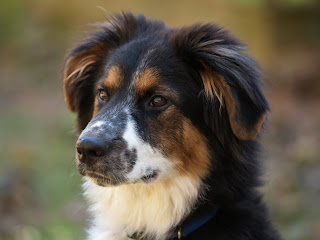 Bernie was quiet and thoughtful, even as a puppy, and he loved nothing more than looking up at the trees and searching for a glimpse of a bird or squirrel. 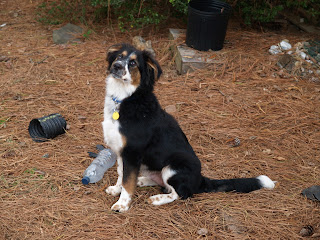 Laura and her husband Anthony fostered Bernie until he was introduced to Jenn's other dogs Big Sandy and Lambchop.  Of course, Big Sandy and Bernie were besties. They would sleep curled up in the same bed. 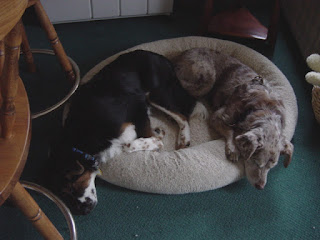 But Lambchop was blind and was afraid of most dogs, but she too loved Bernie from the moment they met. Bernie had a way of letting other dogs feel safe. 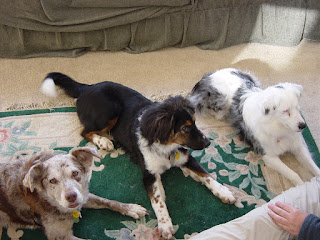 Bernie grew into a thoughtful and handsome dog, but definitely not a Bernese Mountain Dog. Bernie was an English Shepherd, a super smart herding breed. 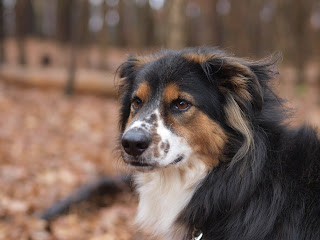 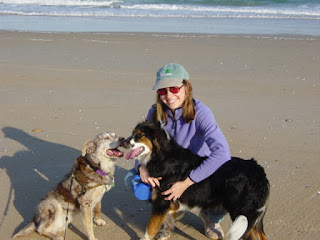 He also loved to go visit Laura and Anthony on the weekends for playtime in their backyard with their German Shepherd Mona. 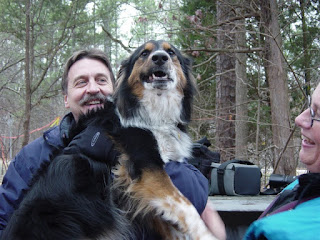 Bernie had fun doing all sorts of dog sports with both Jenn and Laura. He really loved Drill Team with Laura and performing during holiday parades and demos. 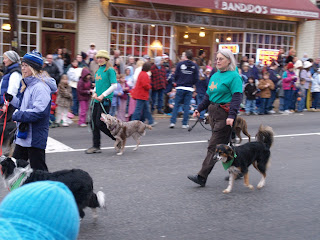 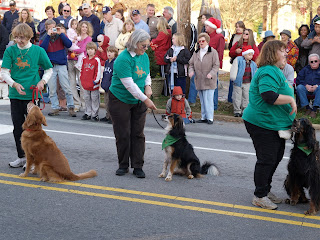 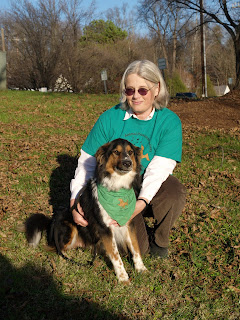 Bernie was a great help to Jenn as her demo dog for classes.

Bernie was especially good as a neutral dog during Canine Good Citizen and Therapy Dog evaluations. 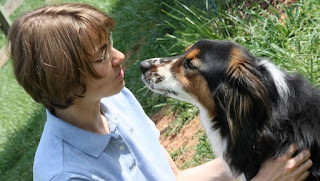 He participated in many workshops for the Tellington TTouch Method, helping students learn techniques and being happy to work with anyone who wanted to be his friend. Bernie was even featured in posters with Debby Potts that promoted TTouch in Japan! 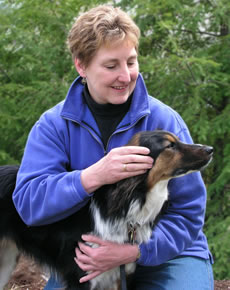 Bernie also worked with Jenn in Animal Assisted Therapy. Bernie specialized in working one on one with children in the Orange County Exceptional Children's program. Was there anything that Bernie wasn't good at?? 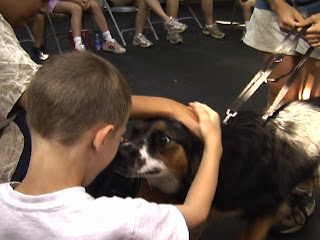 And then of course, I came along. Bernie taught me everything about being a good dog and how to properly observe the goings on of the world. 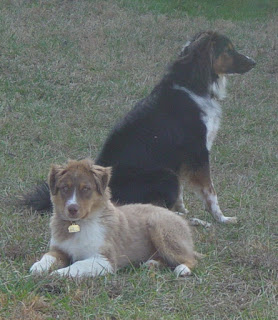 He was patient and kind and I followed he and Big Sandy everywhere. When Big Sandy died it was a big transition for all of us. 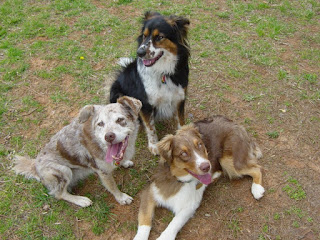 And then Jet came along, and we did our best to teach Jet to be a good dog too. 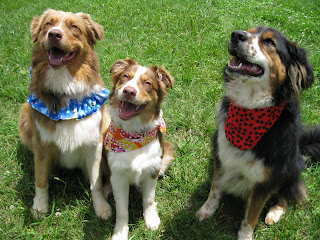 We spent many years being best friends and it was really hard to say goodbye to Bernie when Jenn and I moved to live with Jenn's sister and her family and they had cats. That was probably the one thing that Bernie wasn't good at-being around cats. But then Jenn and I moved to Canada and Bernie came to live with us.  He loved hiking and exploring in the Great White North. 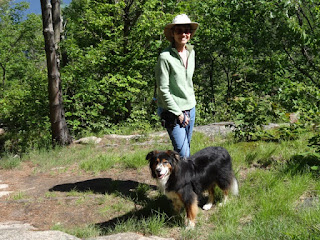 He even liked the cold!! But getting used to wearing doggie boots was a challenge. 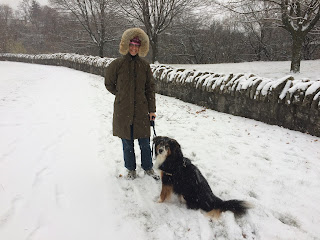 Bernie might have started to slow down, but he loved his walks, spending endless time looking up at the trees and any opportunity to chase a squirrel out of the yard.  And he loved meeting and charming new people. 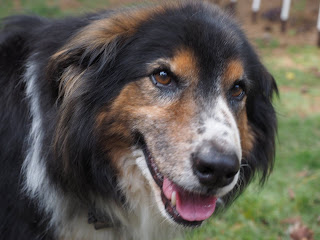 And Bernie and I starred in training videos for Good Dog in a Box, the company that Jenn and her sister Kim started to help children learn about dog body language, dog bite prevention and reward based training for kids. 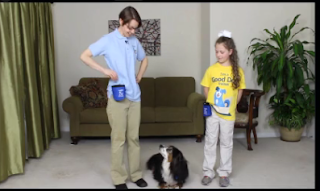 There's even a cartoon version of Bernie too! 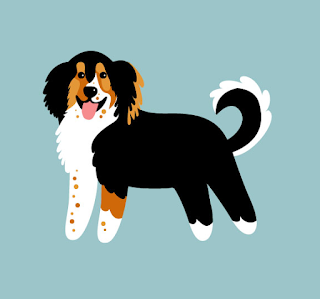 Perhaps the best time in Bernie's life was our vacation in Nova Scotia last year.  Jenn took us to visit Laura and Anthony and their dog Mona at Cape Breton. Bernie got to run free on the beach and in the fields and chased a whole herd of deer off the property. And like a good boy, he always came back when Jenn called him. 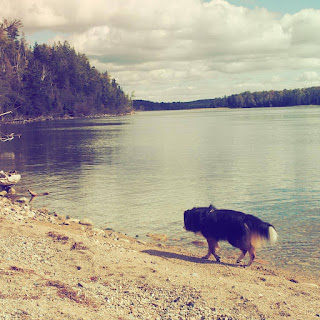 On June 25th, two weeks after being diagnosed with a very aggressive and untreatable form of cancer, Bernie had a seizure and died in Jenn's arms. Bernie was my best friend and best teacher and he was a good, good dog. I'll always remember him and am thankful he helped me become a good dog too. Viva la Bernie!!

Posted by Jenn Merritt at 12:40 PM No comments: