Jenn's Adventures at the APDT Conference

Jenn had an amazing time attending the Association of Pet Dog Trainer annual conference in Atlanta! This conference is an educational opportunity for reward based trainers to share ideas, research and visions of the future of dog training. Jenn went to sessions by John Rogerson, Dr. Ian Dunbar, Victoria Stilwell, Leslie Nelson, Alexandra Horowitz, Dr. Barbara Sherman, Colleen Pelar, and Jean Owen. She really enjoyed the presentations by John Rogerson and Leslie Nelson especially. She said it was a stellar conference and she got to finally get a picture with Dr. Ian Dunbar, founder of APDT. 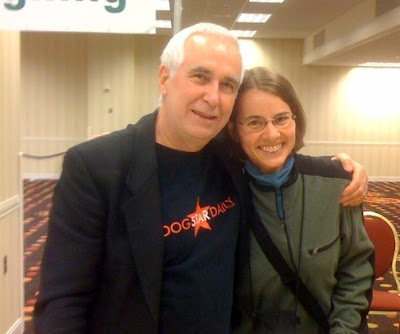 And with Victoria Stilwell too! 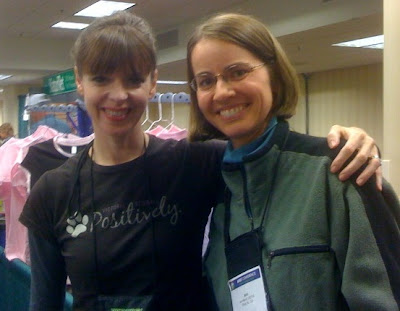 Jenn said the big treat was going to a screening of the HBO movie based on the life of Temple Grandin. At the end of the film, Temple Grandin herself appeared on stage to answer questions. Really a special evening for all those in attendance.
She also got lots of great swag at the trade show, including the Manners Minder, a remote trainer developed by Dr. Sophia Yin. Apparently, we're going to have a ton of fun with this! More on that later...
Posted by Royal at 10:20 AM

I am very jealous. You got to meet Victoria, one of Susan and my role models. What a great photo. Two of our absolute favorite dog trainers standing side by side together. Got any autographed 8X10's of you two?! Jim