Jenn says that we really need to put together some formal training plans for me, Bernie and Jet for the new year. Let's start with me (of course)!

Jenn's big goal for me in 2011 is to develop an individual Freestyle routine for us.

What is Freestyle? Canine Freestyle is a choreographed performance organized with music, illustrating the training and joyful relationship of a dog and handler team. It includes heeling, elements of formal obedience, tricks, and creative freedom between dog and handler. We've been doing group freestyle for several years with the Paws4Ever Drill Team for demos and parades. 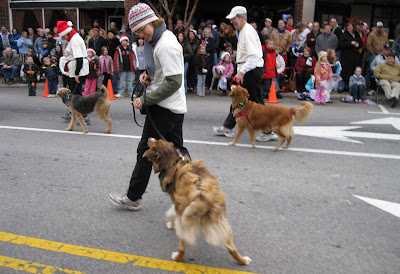 But individual Freestyle is even more challenging. Some dog/handler teams go on to compete in Freestyle trials and/or perform demonstrations in public.

Jenn also joined the Canine Freestyle Federation (CFF), which provides support to those interested in the sport of Freestyle.