Talk about a bit of good news! Jenn just found out that the series of articles she wrote for the APDT Chronicle of the Dog about the Tellington TTouch Method have been nominated by the Dog Writers' Association of America for their 2011 writing awards. 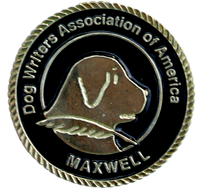 Jenn is a finalist for the Maxwell Medallion for Excellence, in the Subject-Related Series category. Winners will be announced at a banquet in New York City on February 12th. Jenn hopes she will be able to attend.

You can read Jenn's nominated article series on her website, scroll down to "articles by Jenn Merritt": Tellington TTouch Series from APDT Chronicle of the Dog
Posted by Royal at 8:49 AM

Thank you for the pointer to your articles - they are really excellent. Best of luck with the award - it would be a very deserving win.