My yard has been invaded by horrible stinging beasties called Yellow Jackets. They are small wasps that fly and sting and sting and sting. Yellow Jackets live in a nest underground and are very protective and can become aggressive in the summertime if you disturb them. Eric discovered a nest in our garden when he was picking cucumbers. A nest opening looks like this. 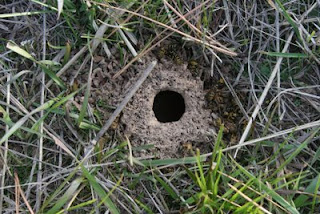 Here is their nest underneath Jenn and Eric's garden in my yard. This is right near where I like to play with my red ball! Jenn was worried the the Yellow Jackets would come after me or Bernie or Big Sandy. 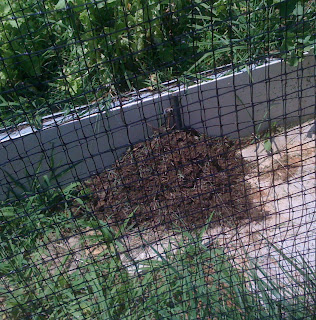 Eric took care of the nest last night while the Yellow Jackets were sleeping. He poured something in their hole and quickly covered it up. I had to spend extra time inside today to make sure any angry nasties didn't return. I certainly hope they are gone! Jenn says that Yellow Jackets aren't all bad and they are beneficial if the nest isn't near people and pets.
Posted by Royal at 9:19 AM

oh no, bees are no friends! i hope no nasty angry bees coming your way while you out playing.

AHHHHHHH! we HATE bees!!! my sister Alki attacks them whenever she sees or hears them! (flys too!) She got stung bad by a few bees once on a hike. Ever since then she has been scared of any bugs touching her or buzzing around her. :( evil beasties indeed!!!