Today is Bernie's 6th birthday! It coincides with Bastille Day, the French holiday. So every year we celebrate Bernie Bastille Birthday and the specialness of our Bernie. Now Bernie's birthday doesn't have the grandeur of my annual birthday party. Bernie likes to keep things low key. Jenn says that Bernie was always a laid back dude even as a puppy. Here's a cute picture of Bernie as a puppy: 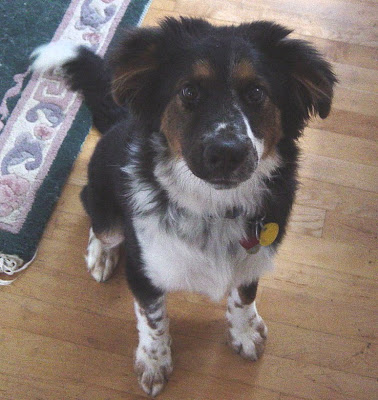 Jenn told me that she and Eric adopted Bernie in December of 2004. But there's a little story about how Bernie came to live with them and how Bernie actually has two families. Bernie and his sister were 10 weeks old when they were brought into the Orange County Animal Shelter as strays in September of 2004. 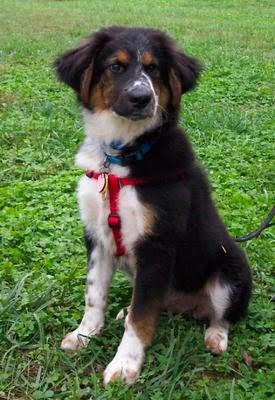 Bernie's sister was adopted quickly, but Bernie sat in the shelter waiting and waiting. He was such a cute puppy, but he was a bit mis-labeled as a Bernese Mountain Dog puppy, and I guess potential adopters thought he might grow into a really big 100 pound dog like this Berner: 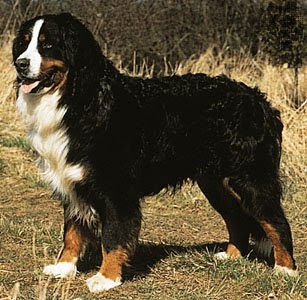 After a few weeks of waiting at the shelter, Bernie was lucky enough to be selected to go to the Animal Protection Society's new adoption center in Mebane (now called Paws4Ever). He arrived in early October. Coincidentally, Jenn and her friend Laura were attending a Tellington TTouch workshop at Paws4Ever and they got to work with the dogs at the adoption center during the training. Laura and Jenn were quite smitten with puppy Bernie and they got to thinking that Bernie might be kind and gentle enough to live with Jenn, Eric, and their dogs Lambchop and Big Sandy. I never knew Lambchop, but Jenn tells me she was a dog with special needs they had before me. 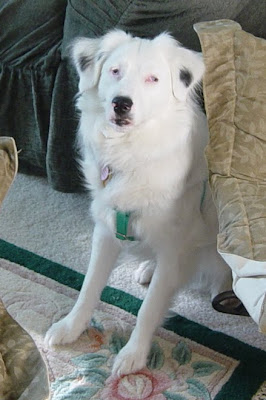 She was also an Aussie, a tiny white girl, and she was blind. She got scared very easily and sometimes felt threatened by the world. Most other dogs scared her, so Jenn and Eric knew that bringing another dog into their home was going to be a challenge.

But a thoughtful dog with a low key nature, might work out perfectly. Laura and her husband Anthony agreed to foster Bernie while she and Jenn introduced Bernie and Lambchop using lots of TTouch to keep everyone relaxed and balanced. Introducing dogs to each other needs to be done in a slow way for sensitive dogs. So, Bernie lived at Laura and Anthony's house while Lambchop learned to trust him. 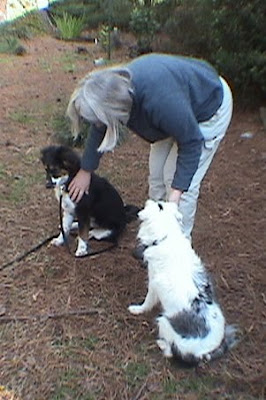 Very slowly, first on leash, letting them sniff each other through a fence, then off-leash in a neutral place for short periods of time, Bernie and Lambchop got to know each other over the days and weeks. One day Bernie came over to spend the night and he never left. 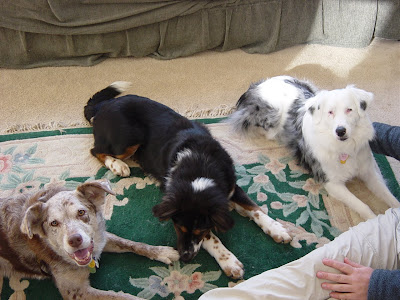 He and Lambchop become great friends and Bernie became very skilled at playing with Lambchop in a way that made her feel safe. He exaggerated all his calming signals and even though she couldn't see him, she responded. 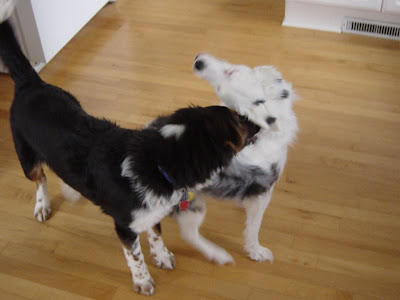 Bernie really helped Lambchop have a better life. Bernie makes everyone happy for that matter. And luckily, Bernie didn't grow into a Bernese Mountain Dog, as he's only about 45 pounds. Bernie might be an English Shepherd? 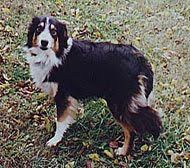 And Bernie gets around-he spends time with his other family regularly (Laura and Anthony and their dog Mona and other Bernie, another English Shepherd, owned by Laura's mother). 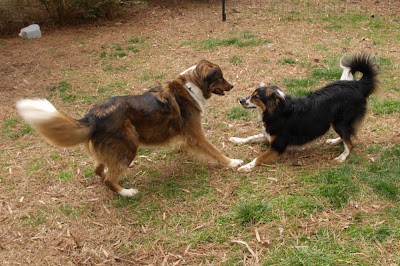 And he and Laura march in the Paws4Ever Drill Team with me and Jenn. 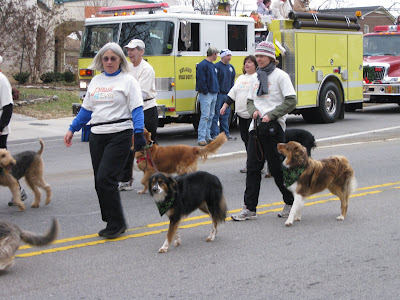 He's one pretty terrific pup. So today we celebrate-Happy Bernie Bastille Birthday!!
Posted by Royal at 8:48 AM