Our Tree in memory of Big Sandy

Today, Jenn and Eric planted a tree in memory of my friend Big Sandy. She died on September 24th and members of the Paws4Ever Drill Team gave us a gift certificate to the Unique Plant in Chapel Hill. 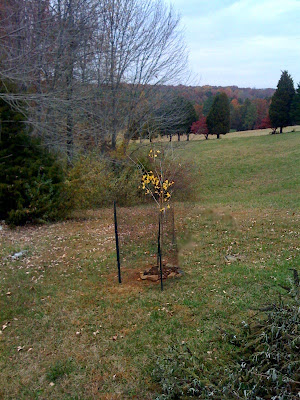 Jenn had been thinking about what kind of tree to plant for sweet and wonderful (and long lived) Big Sandy. She and Eric picked out a ginkgo biloba, a beautiful, large tree with fan-like leaves that turns golden yellow in the fall. Here's some interesting info on ginkgos:

"Darwin called the ginkgo "a living fossil." Ginkgo biloba, the graceful ornamental we know, is the only remaining species of a venerable genus that flourished with the dinosaurs. The ginkgo is said to be the oldest living seed-bearing plant, and, as such, it has become a symbol of longevity and of hope. In the century just past, it was the ginkgo, among all trees, that was first to bud unblemished at Hiroshima in the aftermath of atomic destruction."

Our ginkgo was planted right outside of yard within clear sight of the tree they planted for Elvis (their first Aussie) and Eric protected it with stakes so the deer can't trample it. I hope it grows as big as it can and look like this one day:
When your pet dies, you lose a very important member of your family. Some might say "well, it was just a pet". People and their pets really do grieve for each other and you may find it helpful to do something in your pet's memory. Here are some things that Jenn has done to help her process the loss:

Plant a tree or create a special place in a garden. Working in the dirt can be very therapeutic (even dogs know that).
Put together an album of favorite photos. Frame your favorites.
If your pet was cremated, find a unique vessel for their ashes. Think creativity and get outside the box (literally) on this one.
And take time for yourself. Everyone deals with loss differently and sometimes just talking about it can help a lot.
Posted by Royal at 1:05 PM

Big Sandy was such a great dog. We miss her on the Drill Team.

this is so sweet