Jet is Five Weeks Old! With a full tail and "thumbs"! 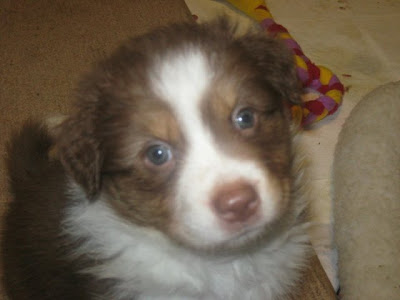 Our puppy Jet is now five weeks old. We got new pictures of her yesterday. The breeders Katrina and Sherry say that Jet is super smart and agile. She likes to explore and climb. 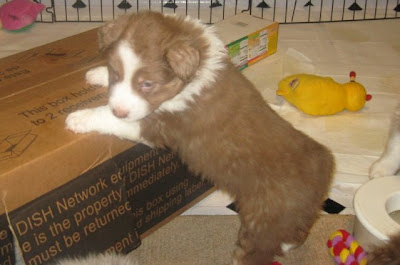 One thing that is very different about our Jet is that she is the only puppy from the litter that got to keep her tail and front dewclaws (at Jenn's request). 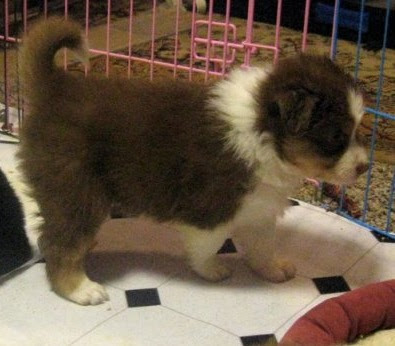 Jet uses her tail for balance and carries it over her back like Bernie does. This tail is definitely going to come in handy during her lifetime. She'll be better able to communicate with other dogs since we use our tails so much to signal how we feel and what our intentions are. 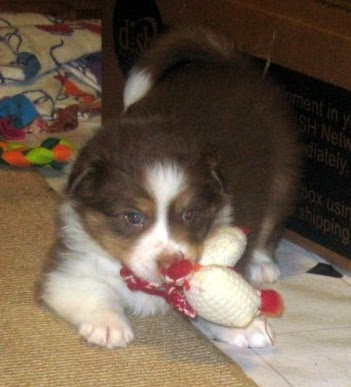 And the tail is really just an extension of the spine. It can be used for mobility and balance, particularly while running and jumping. Pretty important stuff if you ask me. Makes me wish my tail was longer too. My butt is still cuter anyway.

Now the front dewclaws are really just like thumbs. They are the letter D in the photo below. We use them to grip things and when we run, turn, and jump.I guess it was lucky Jenn went to a seminar several years ago given by Dr. Chris Zink who is a veterinarian that specializes in canine sports, canine structure and locomotion. Dr. Zink feels that we should not be removing dew claws and tails simply because the breed standard tells you to. Dogs really need their tails and dew claws for a lifetime of healthy structural functioning.


Excerpt from "With a Flick of the Wrist" by Chris Zink, DVM, PhD
(as seen in Dogs In Canada – September 2003)

In the last several years, while doing sports-medicine consultations for performance dogs across Canada and the United States, I have seen many canine athletes with carpal arthritis. Interestingly, this condition is much more common in dogs that have had their front dewclaws removed.

To understand why, it is helpful to understand the structure of the carpus. This joint consists of seven bones that fit together like fieldstones that are used to build the walls of a house
The carpus joins to the radia and ulnar bones (equivalent to our lower arm), and to the metacarpal bones (equivalent to our hand). Each bone of the carpus has a convex or concave side that matches a curve on the adjacent bone. Unlike the bones of the elbow, for example.

With so many carpal bones that don't tightly interlock with the adjacent bones, the ligaments of this joint can be easily stretched and even torn when torque (twisting) is applied to the leg. The dewclaws have the important function of reducing the torque that is applied to the front legs, especially when dogs are turning at a canter (the main gait used in agility).

In the canter, there is a moment during each stride when the dog's accessory carpal pad (on the back of the carpus) of the lead front leg touches the ground and the rear legs and other front leg swing forward to prepare for the next stride. At this point, the dewclaw is in contact with the ground and if the dog turns, the dewclaw can dig in for extra traction to prevent unnecessary torque on the front leg. Without the gripping action of the dog's 'thumbs’ there is more stress on the ligaments of the carpus. This may cause the ligaments to stretch and tear over time, resulting in joint laxity and ultimately, arthritis.

Here's another website that explains the important points of keeping tails and front dew claws.
Posted by Royal at 9:35 AM

She is pretty cute. I have my dew claws too and they are useful.