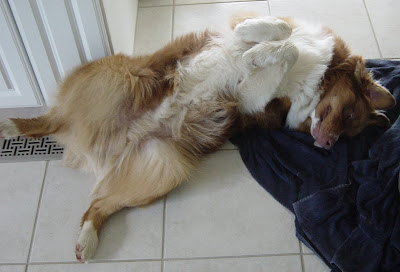 Neuter! Jenn says that neutering will be a good thing, particularly after my randy, rowdy behavior over the food holiday. Oh really!! She says that dogs that are neutered:
What neutering won't do:
It certainly would be nice to have a clear head and concentrate on other things, like learning new things, making new friends, and earning more clicks and treats. I guess it won't be so bad.

To learn more about the benefits of spaying/neutering, click here.

Your operation won't be too bad. I was spayed this summer and recuperated very quickly. However it is an opportunity to look pathetic and get more attention from your people.

Don't lick your stitches or they will put the dreaded satellite dish on your head.